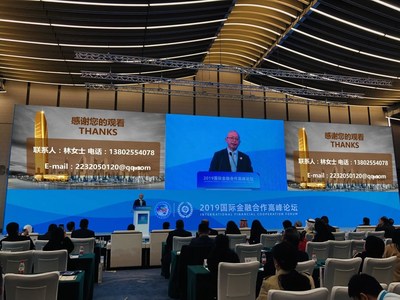 At the forum, HDFH formally launched the Global Digital Bank Consortium Blockchain Investment Fund. The fund, initiated by HDFH, Yillion Bank and Zhongguancun Private Equity & Venture Capital Association (ZVCA) in collaboration with domestic and international investors, will invest in digital banks and proven fintech infrastructure platforms worldwide, as well as integrate the capabilities of the three parties’ management teams to facilitate the upgrading of investment targets, ultimately maximizing value in the capital markets.

“Based on the investors’ accumulation of experience in the fintech sector, the fund plans to invest in and create a leading digital bank, through which it will build a global digital bank consortium blockchain. The first step is to invest in and digitally transform a bank. The second step is to build a global digital bank consortium blockchain, with the digitally transformed bank as the main node.”  HDFH Chairman Cao Tong said.

The size of Global Digital Bank Consortium Blockchain Investment Fund will be around US$1 billion with a term consisting of a 6-year investment phase and 2-year exit phase.The fund will initially invest in and digitally transform a bank, which will then serve as the main node of the global digital bank consortium blockchain.

HDFH, a leading fintech firm in China, has extensive fintech and blockchain technology reserves and operational experience and is an enabler of the digital transformation of banks and of consortium blockchain technology. Shenzhen Jia Asset Management, a subsidiary of HDFH, is the first fintech equity fund manager in China with extensive experience in investment management. In concert with Shenzhen-based state-owned enterprises, district governments, public companies, industry groups and commercial banks, Shenzhen Jia Asset Management has set up two fintech innovation and venture capital funds.

Yillion Bank is one of four internet banks in China to receive permission from the government to engage in online credit business. The bank has solid operational capacity through partnerships with Meituan, JD Finance, Xiaomi Finance and Du Xiaoman Financial. ZVCA brings to the table a large number of investment resources including public companies, financial groups and corporate investment firms. ZVCA’s members collectively have more than US$300 billion of funds under management.

HDFH, Yillion Bank and ZVCA plan to build a groundbreaking global consortium blockchain that includes digital banks and proven fintech firms to achieve what they are referring to as delivering value through the establishment of a digital connection. The Global Digital Bank Consortium Blockchain Investment Fund now plans to invest in digital banks in mainland China,Singapore and Australia, among other countries and regions.